Structure of the organization

As at December 31st 2012, the LOTOS Group comprised Grupa LOTOS (the parent entity), and 34 production and service companies, including:

(1) On January 10th 2012, 100% of shares in LOTOS Parafiny Sp. z o.o. were sold to a third party, Krokus Chem Sp. z o.o. As an additional element of the transaction, on November 29th 2011, the parties signed a seven year agreement for the supply of slack waxes by Grupa LOTOS S.A. to LOTOS Parafiny Sp. z o.o., for the period from January 1st 2012 to December 31st 2018. The estimated net value of the agreement is PLN 780m. The maximum net value of contractual penalties is estimated at PLN 98m. The agreement does not contain any provisions which would prevent the parties from seeking additional compensation beyond the contractual penalties. The other terms and conditions of the contract do not differ from the terms and conditions commonly applied in agreements of this kind.

Grupa LOTOS S.A. also continued purchasing shares from non-controlling shareholders as part of the voluntary share purchase process, which was completed at the end of March 2012. From January 1st 2012 to the completion of the voluntary share purchase process, Grupa LOTOS S.A. acquired 26 shares in LOTOS Petrobaltic S.A. with an aggregate value of PLN 3,000, representing 0.0003% of the company's share capital.

With respect to the remaining shares held by non-controlling shareholders, excluding the shares held by the State Treasury, on May 8th 2012 the Extraordinary General Meeting of LOTOS Petrobaltic S.A. adopted a resolution on minority squeeze-out by the majority shareholder, that is Grupa LOTOS S.A.

(3) The shareholding changes described in item (2) above also resulted in changes in Grupa LOTOS S.A.’s indirect interests in the share capitals of the subsidiaries and of the jointly-controlled company of LOTOS Petrobaltic S.A.

(6) On November 12th 2012, LOTOS Petrobaltic S.A. and Kancelaria Prawna Domański i Wspólnicy sp.k. executed a share purchase agreement whereby LOTOS Petrobaltic S.A. acquired a 100% interest in Baltic Gas Sp. z o.o. Baltic Gas Sp. z o.o. was excluded from consolidation due to the fact that the data disclosed in its financial statements as at December 31st 2012 is immaterial to the performance of the obligation specified in IAS 27 Consolidated and Separate Financial Statements.

Structure of the LOTOS Group
As at December 31st 2012 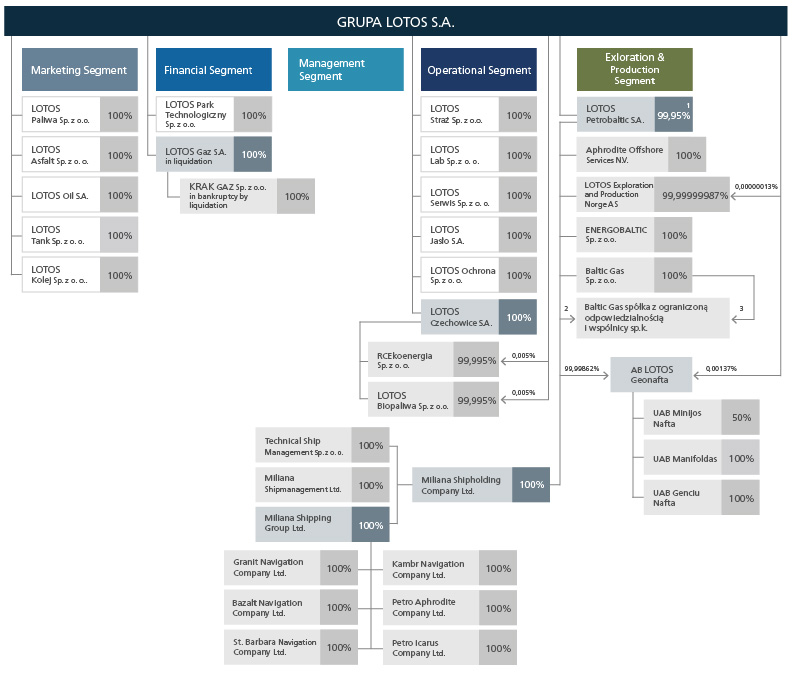 Within the LOTOS Group, the role of Grupa LOTOS as the parent entity is to integrate the key management and support functions.

To this end, Grupa LOTOS has implemented a segmental management model. A segment is understood as a separate area of business activities managed at the Group level by a designated member of the Board of Grupa LOTOS. This model enhances management efficiency, delivering Group-wide cost and revenue synergies. Segmental management provides for consistent implementation of strategy, coordinated planning and controlling, integrated operational management and maintenance of uniform corporate standards.

In the operational activities of the LOTOS Group, the following two main reporting operational segments can be identified:

Production and marketing operational segment – comprising activities of companies concerned with production and processing of refined petroleum products as well as their retail and wholesale, and support, transport and servicing activities.

For management purposes, the LOTOS Group is divided into the following business units based on the industry segments:

Management segment – falls within the remit of the President of the Board (i.e. the head of the management segment). The management segment’s activities are focused on increasing the LOTOS Group value through overall management of its operations, including coordination of efforts to formulate corporate strategies, define development directions for individual business areas and coordinate the process support function.

LOTOS Petrobaltic and its affiliates are part of the exploration & production segment.

Marketing segment – falls within the remit of the Vice-President of the Board, Chief Commercial Officer (i.e. the head of the marketing segment). The marketing segment’s tasks include formulation of marketing strategies as well as effective management of sales, supplies and distribution of crude oil and petroleum products. It is also responsible for the development of trading and optimisation activities.

LOTOS Park Technologiczny and LOTOS Gaz w likwidacji (in liquidation) and its affiliate are part of the financial segment.

In 2012, there were significant changes to the Grupa LOTOS’ organizational structure, effected as a result of changes in the composition of the Company’s Board. The changes were made to:

Breakdown of the operational segments
As at December 31st 2012 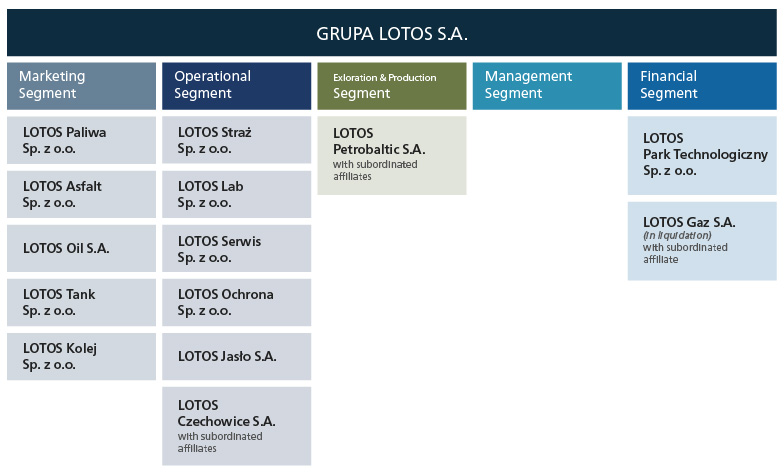 The corporate structure of Grupa LOTOS reflects its division of competences and the relationship between the various functions and tasks performed at the Company, and specifies the organizational and management hierarchy. As at the end of 2012, the corporate structure of Grupa LOTOS comprised the following units: 15 divisions, including 5 divisions reporting directly to the Chief Executive Officer, 35 offices, 19 departments, and 8 complexes.

Structure of the LOTOS Group
As at December 31st 2012

Breakdown of the operational segments
As at December 31st 2012