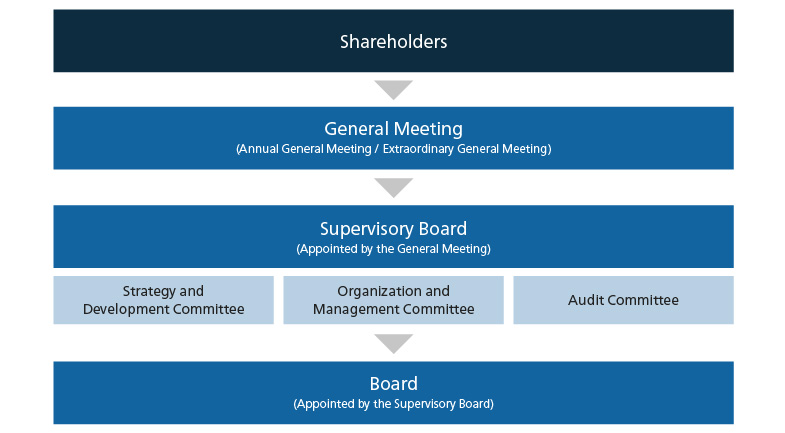 Since its stock market debut in 2005, Grupa LOTOS has adhered to most recommendations set out in the “Best Practices for Public Companies”, and since 2008 it has followed the “Code of Best Practice for WSE Listed Companies”, last amended by the WSE’s Supervisory Board in its Resolution of November 21st 2012. The latter document comprises a set of principles designed to establish best practices of corporate governance and bring corporate supervision in line with EU standards.

In 2012, Grupa LOTOS complied with most of the obligatory corporate governance principles set forth in the Code of Best Practice for WSE Listed Companies.

In line with the comply-or-explain principle, which provides that companies should either comply with corporate governance rules or explain any recurring or non-recurring instances of non-compliance, the Board has published non-compliance lists with relevant explanations since 2008.

Pursuant to Par. 29.3 of the WSE Rules, on January 27th 2012 the Company reported a single instance of non-compliance with rule 5 set out in Section III of the Code of Best Practice for WSE Listed Companies, connected with the resignation on that day of Rafał Wardziński from his position as member of the Grupa LOTOS Supervisory Board.

We try to communicate an accurate, reliable and clear picture of our operations and financial standing to investors. We provide them with up-to-date information in compliance with the principles of involvement of, availability to and equal treatment of all investors. On the Company’s investor relations website, available in two language versions at www.inwestor.lotos.pl/en, we publish corporate governance information, including annual statements of compliance of the Company and the LOTOS Group, as well as reports released via the EBI system.

We have in place mechanisms enabling our shareholders and employees to submit recommendations and other comments directly to members of the bodies supervising the correctness of the organization’s management processes. In line with the Polish Commercial Companies Code, the Articles of Association of Grupa LOTOS and the Rules of Procedure for its General Meeting address these issues in detail. They define the rules governing participation in the General Meeting and exercising voting rights, the manner of convening and closing the General Meeting, its opening and proceedings.

Moreover, shareholders may request that an Extraordinary General Meeting be convened and certain items be placed on its agenda.

In addition to the requirements imposed by law, the rules laid down in the Code of Best Practice for WSE Listed Companies define mechanisms aimed to improve the quality of corporate relations with investors, while enhancing the protection of shareholder rights, also in matters falling outside the scope governed by law. They encourage companies to: